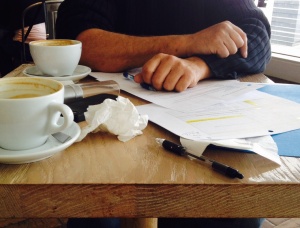 After a bit of a hiatus while we worked on The River, an animation to the song River of Snot by The Arrogant Worms (released here on April 29th), we’re back in earnest, moving forward with our next film, Mary and The Looking Glass. Working on other projects and without the time and resources (aka financing) in place, means that sometimes work happens in a stop and start manner in between other revenue-generating, bill-paying work. This was the case with Skeleton Girl (our first film for those of you who are new to our work), and has been the case thus far with MLG (this is my new abbreviation for Mary and The Looking Glass so I don’t have to spell it out every time). As smallish independent filmmakers with a full-time company to run, we don’t have the luxury yet of working on just the film at hand.

In any event, this isn’t a “woe is me” posting. The whole business end of planning a film is fun and exciting and inspiring and we’d love to share the ups and downs with you. So, today we scheduled a Saturday morning budget meeting away from the distractions of the office and over a cup of mocha and a pain au chocolate. It was a great idea and something we need to do more of.

After coming down from the high of releasing The River this week – and like drug addicts needing a hit, obsessively checking our You Tube views (we hit 1000 after 2 days which seemed pretty good to us) – we’re back to business, plotting the plans for our next short. We learned a lot on Skeleton Girl and The River; we’ll see how we can apply those lessons this time, and what else is in store for us.

One really learns by doing, but maybe we can lesson the pain or time or expenses for you by sharing some of our experiences. If not, we still hope you get a chuckle or grimace, or something useful out of these posts. And we’d love to hear back from you, so let us know your thoughts.

…and the credits roll

The film at the movie theatre is over; those of us who played a part in its making stay in our seats, moving our heads side to side as we try to read the names of the people who worked on the film as others get up from their seats and leave. Really, people? What’s an extra five minutes of showing your appreciation of a film by staying to see who the many, many people were that worked on it?

When we made Skeleton Girl and were desperately trying to complete it in time for its world premiere, I wanted to do the credits in a standard white on black rolling format for the sake of expediency. “Let’s just get this done” I thought. My partner and co-producer/co-director Leo wanted to animate the gravestones with the credits on them instead. Now, I think it’s one of the highlights of the movie. Why? Because we went the extra mile to make something better and we took the time to create a look and feel that was in sync with the rest of the film (3D, stop motion, and re-using props from the film). From a visual and creative standpoint, this was the right decision. To change the look to something 2D and flat would have diluted the whole experience we were trying to achieve. We also had some powerful music created by composer Tomasz Opalka to accompany the credits. We would not have risen to the occasion of trying to match his outstanding musical score had we cut corners and not animated the credits. The two work together to create a lovely way of wrapping up the film and the audience’s experience of it.

So, here we are two years later having the same discussion. Should we do a standard menu for the Skeleton Girl Collector’s Edition Blu-Ray + DVD Combo Pack or should we animate the menu? Although I hesitated, I should have learned my lesson the first time. Yes it will take longer, but the whole experience for the viewer will be better. We’ve dusted off the skeleton hand and the gravestones. They’re back, and will get their animated groove on just like in the film’s credits.

So, when you’re getting up and leaving the theatre when the credits start to roll, sit back down. You just might be in for a special, unexpected treat. And even if you’re not, imagine you’re one of the people who worked really hard on that film. Would you want everyone leaving the theatre? Probably not.

Check out this piece with Eugene Levy, “Eugene Levy and a Golden Retriever Defuse a Bomb” in which he addresses exactly this issue. 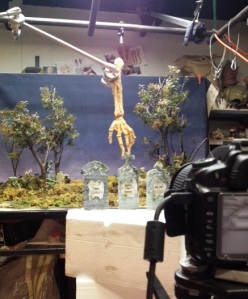